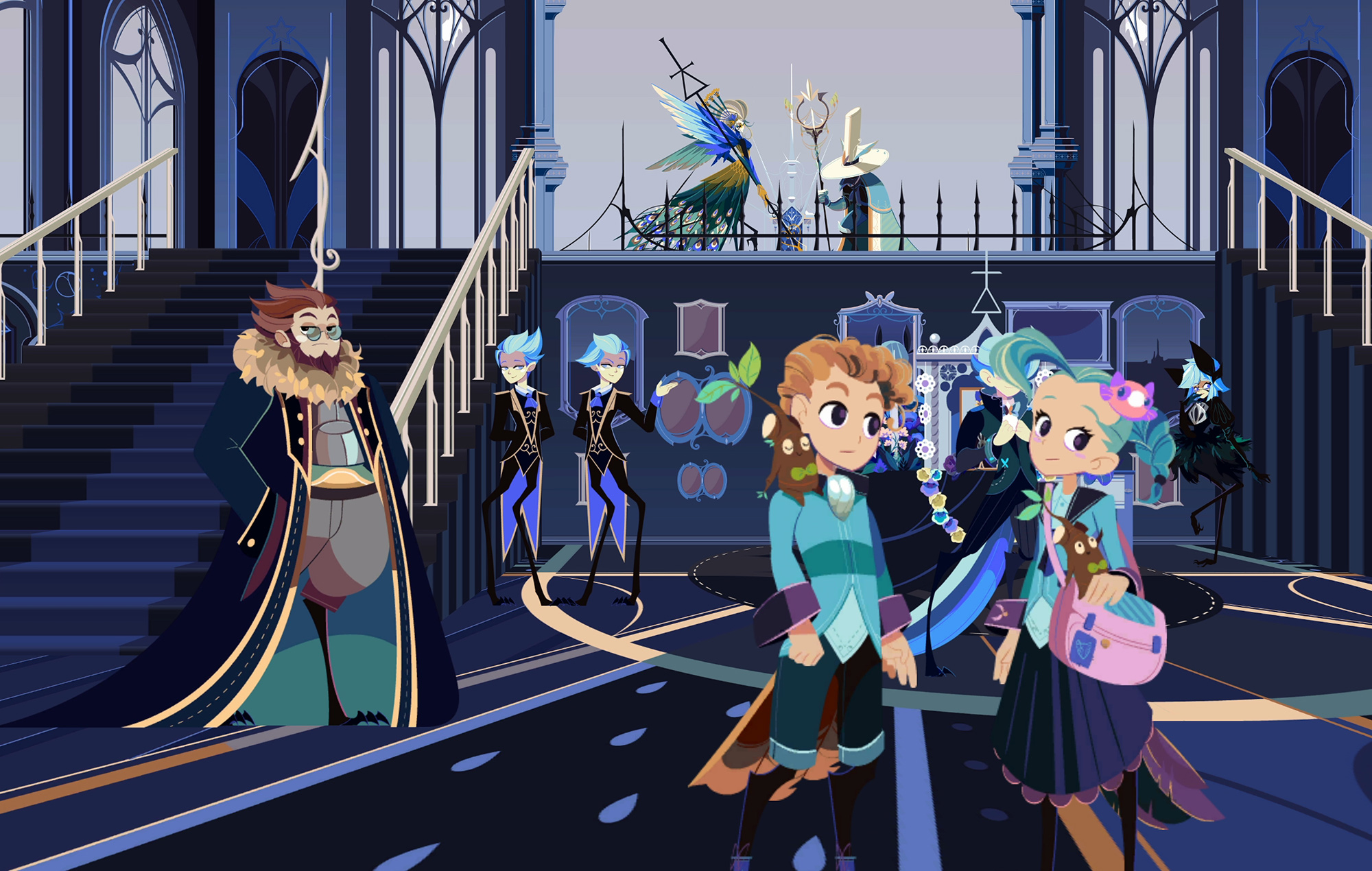 There’s a moment early on in Cris Tales where the protagonist Crisbell – a genre-typical orphan, utterly unaware of her origins or destiny – gains what will become her signature time-bending abilities. It’s meant to be a moment of apotheosis, where the unassuming heroine steps into the power she will need to change the world, impressing on the player some sense of urgency and importance. Instead, it’s an indicator of one of the key problems that plagues the game.

This moment, spoken of as a major event afterwards, is supposedly when Crisbell opens the crystals of time, awakening as a Time Mage and gaining the ability to see past, present, and future at once. What actually happens on screen though is Crisbell picks up a rose in front of a stained glass window.

Long-time fans of classic Japanese RPGs – and we’re talking 16-bit era classic, here – may take this in their stride. It’s the sort of convention that shows up in countless games, where if you know the rules of the genre, you just get it. Crisbell needs powers for the story to start, ergo she gets powers and we can talk about how important it all was later.

Cris Tales developer Dreams Uncorporated and SYCK definitely get it – the Colombian indies specifically set out to create a love letter to JRPGs of old, particularly the likes of Chrono Trigger and classic Final Fantasy. The problem is, being such fans themselves, they seem to have presumed that everyone else playing will know the rules, understand the references, or similarly get it, even as characters pop up with pronounced gravitas but no real introduction, or lore is discussed as if common knowledge, despite no explanation.

The result is a game that – ironically, given the themes of temporal manipulation – is in a rush to get somewhere, without ever really committing to the journey. It’s never wholly alienating, but it is frequently jarring, yanking the player out of an otherwise immersive world. It’s a shame, as once you do commit to Cris Tales’ world, it reveals a solid JRPG style experience that homages the format with reverence, while still offering some innovative twists.

Like so many of its forebears, Cris Tales’ combat opts for a turn-based approach. Initially, it might seem exceedingly old-fashioned, but as Crisbell learns more time magic and builds relationships with her teammates, it becomes increasingly layered. Rather than just taking turns to wallop each other, you can send enemies into the past or future, de-ageing strong goblin warriors back to runts or ageing soldiers into retirement territory, for instance.

As allies improve their own powers, you can combine them to even greater effect – using Cristopher’s water magic to soak armoured enemies, then casting them into the future so their defences are rusted to nothing, or planting a poison plant with another ally, Willhelm, before using Crisbell’s time powers to bloom it instantly, magnifying the detrimental status effects. There are a host of combinations and applications, and many of them are there to be discovered through creative experimentation.

Outside of battle, Crisbell’s powers are tailored more towards problem solving. With the past of an area to the left of the screen and the future to the right, Crisbell – rooted in the present – has a vantage point from which to correct injustices or prevent nightmarish scenarios coming to pass. Occasionally, you’ll also take control of Matias (a talking frog in a top hat, of course) to “time hop” into the past or future, gathering information or bringing important items to the present to change the timeline.

This is an area where Cris Tales really delights. While there is a grander plot involving predictably cosmic stakes to unfurl over the course of the game, it’s often more concerned with mundane affairs. Over their journey, Crisbell and friends get involved with causes such as defending exploited workers – forced to mine a valuable magical resource that only a rich city’s upper class get to enjoy, even as the low town floods in the future – and pushing back against the hording of crucial medicine as often as they rip into outlandish fantasy creatures.

Consideration for the future – and humanity’s power to change it for the better – is perhaps the central message of Cris Tales. With just a little foresight and the will to act on it, anyone can help improve the future – no time magic required. Everything here may be veiled in fantasy trappings, but the metaphors are transparent, making this a game steeped in social conscience.

It also pushes home the fact that choices have consequences – a choice developers made that will have the consequence of driving completionists mad. Certain decisions, such as which house to save or which side to choose in an argument, change the entire course of the game, meaning you’ll need several playthroughs to see everything Cris Tales’ story has to offer.

Thankfully, if you do choose to go for several runs, the game is at least a joy to look at while you do. While the anime influences are apparent, this is no cheap or lazy attempt to jump on a popular aesthetic. Instead, Cris Tales offers a gorgeous approach to design and animation, combining anime sensibilities with aspects of the superflat art movement, pop-up storybooks, and the developers’ own Colombian roots showing in the world’s architecture and fashion, to create a truly unique visual approach. It all looks simple at a glance, but the more you observe, the more you’ll appreciate Cris Tales’ rich detail.

It’s a treat for the ears too, with a lovely suite of instrumental music that perfectly matches the emotion of every scene. Perhaps most impressive though is the English voice, which is above and beyond the quality of many actual anime games. There’s nuance and inflection in every performance, even for supporting characters who only appear briefly.

Unfortunately, all of Cris Tales’ positives may be lost on players who aren’t as big a fan of 16-bit JRPGs as the creators at Dreams Uncorporated and SYCK. The pacing is erratic – another temporal irony – striking an often frustrating balance between adventuring and problem solving, with little freedom to go off-rails and explore. Anyone whose expectations of JRPGs is more Final Fantasy XV than Final Fantasy VI is likely to feel weirdly impatient here.

There’s also a lack of polish in some areas. Battles occur randomly, but unlike the classics that Cris Tales loves so much there’s no screenbreak or rousing fight music to herald an encounter with a flourish of excitement, only the same loading screen you get when transitioning between areas. There are also frequent typos in the onscreen dialogue, most notably with the city “Crystallis” being occasionally called the far less romantic “Cystallis”.

It’s odd to feel like a game was made by people who were too big fans of the genre, but that’s where Cris Tales sits – a treat if you’re already in on its tropes, but the developers forgot that not everyone is. More polish and attention to detail, especially in those crucial story moments, would have made this one for the ages.

Despite valiant attempts to be additive to the genre, Cris Tales never quite escapes from under the weight of its own influences. If you don’t have a particular passion for the era, or a willingness to be swept up in a decidedly old-school adventure, Cris Tales’ charms will likely be lost on you. For the target demographic though, this love letter will likely be received with all the affection the developers put into it.

The post ‘Cris Tales’ review: a contemporary epic with a conscience, hung up on JRPG history appeared first on Askhiphop.