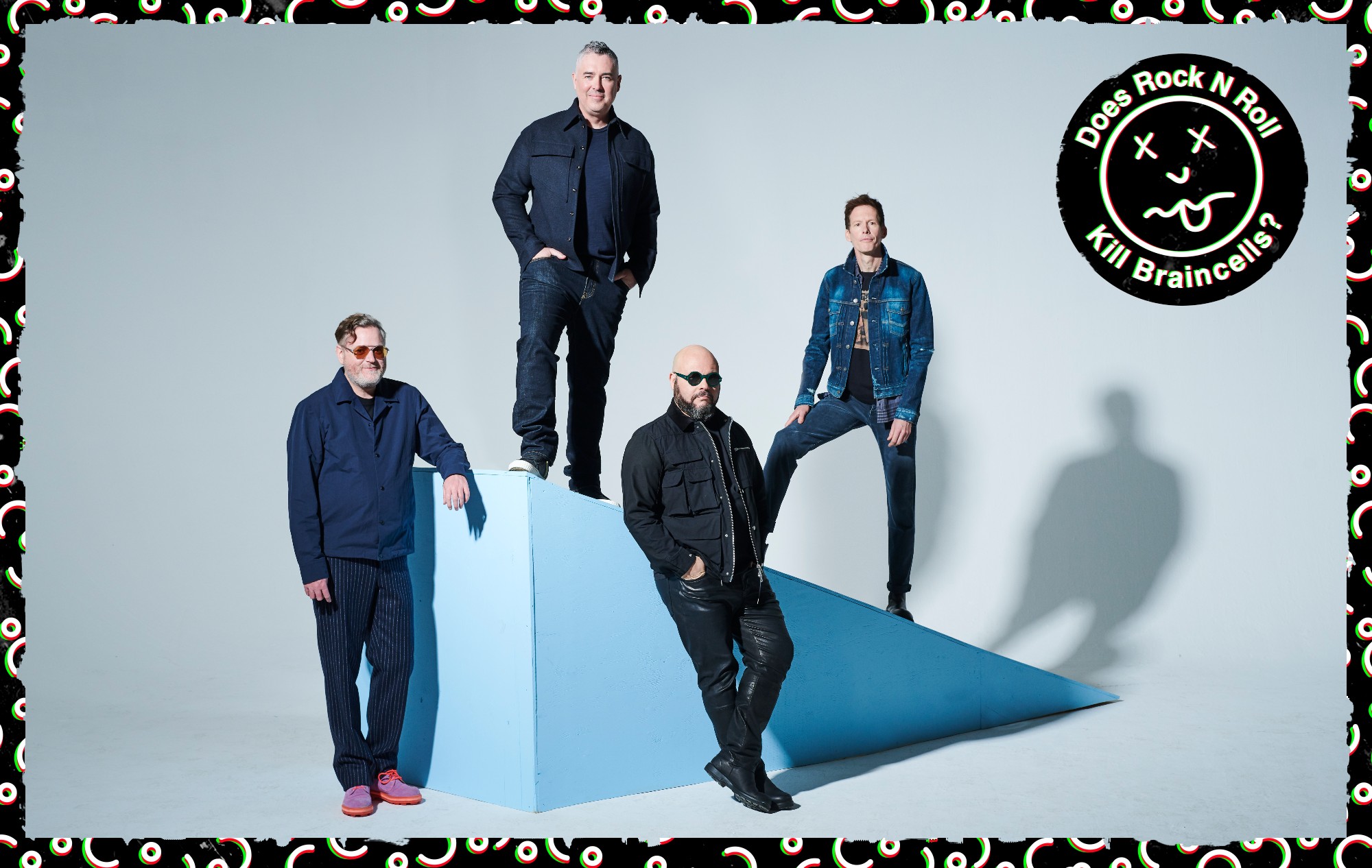 How many weeks has it been since your hit single ‘One Week’ was released?

“Come on! I was arts kid. Math was not my strong suit, so that’s pretty close!”

That song was ubiquitous in the late ’90s. Did you ever get sick of it?

“I’ve never understood artists who have a difficult relationship with their hit songs. I improvised ‘One Week’, freestyled it, thought it was hilarious but would end up as a B-side. When the record company loved it, I thought it was ridiculous but I loved the song. When it became a worldwide Number One song, it was great because it was indicative of what the band does live. It’s fun and super high-energy. There was a time when, yes, we got a little bored of playing it live, so we just did it differently – like we did it as a bluegrass song for 18 months, before returning to the rock version.”

Who claimed in 2008 that Barenaked Ladies could “outsing” The Beatles?

“I know the answer, but I’m not sure I 100 per cent believe it. Paul McCartney said that.”

CORRECT. He reportedly said that Barenaked Ladies’ “harmonies are are right on”, adding: “They could outsing us any day of the week. I don’t think John [Lennon] and myself ever had the sort of range they do.”

“I think he was either stoned or has not listened to the Beatles in a long time! (Laughs) What an incredible compliment. I can’t believe it happened, because one time I was asked about Prince thinking [Barenaked Ladies’ fourth album] ‘Stunt’ was the greatest album of the year on a radio station, and I completely lost my mind because I’m a massive fan of his. But I tracked down the source of the quote and it was me in another interview talking complete nonsense saying, ‘Prince thinks ‘Stunt’ is the greatest album of the year!’, and it was printed as if it was true. (Laughs) In the back of my mind, I’m still searching for the interview where I claimed that Paul McCartney said we sing better than the Beatles – but I’ve yet to find it. I cannot believe Sir Paul said that.”

He also allegedly said he would not mind recording with Barenaked Ladies in the future. Would you be up for it?

(Mock-sarcastically) “We’re very busy, and logistically it’s very hard for us to slot something like that… Of course I would! He’s a genius and I’d work with Paul McCartney on anything in a heartbeat. I would move mountains to make that happen.”

On the subject of the Beatles, what did Yoko Ono think of Barenaked Ladies’ single ‘Be My Yoko Ono’?

“We met Sean [Lennon, her son] early on because he was a fan, and he tipped his mom to the song. She was moved because it was of the first pop cultural sympathetic takes on John and Yoko, and she gave us access to footage to use for the video. She liked the song – but she said she liked ‘”If I Had $1000000’ better!”

“I know he did it on his live tour, but I don’t know the name of the record. Is it ‘Smile Live’?

“He stopped by the studio when we were making [fifth Barenaked Ladies album] ‘Maroon’ to preview his version to us. Which was so bizarre! The producer Don Was said: ‘A friend of mine is going to stop by. He’s got something he wants to play for you’. In comes Brian Wilson to play us Brian Wilson’s version of ‘Brian Wilson’. Afterwards, he looked us and said: ‘Is it cool?’. I said: ‘Is it cool?! Brian, it’s the coolest fucking thing I’ve ever heard!’ As he walked out of the studio, his parting words of wisdom were: ‘Don’t eat too much, guys!’.”

Anyone else get a kick out of one of your lyrical references?

“In ‘One Week’, I sing the lyric, ‘Big like LeAnn Rimes’, and she burst into our dressing room at a festival once and said: ‘What do you mean big like LeAnn Rimes?!’ I replied: ‘Big – like popular’. And she said: ‘Oh I thought y’all was saying I was fat!’”

So, Brian Wilson and Paul McCartney are both unexpected Barenaked Ladies fans. Any others?

“Tom Morello from Rage Against the Machine spent quite a while convincing our disbelieving drummer Tyler [Stewart] that he actually really liked our band, by naming one increasingly-obscure song of ours after another.”

After they slagged you off and called you “crap”, which Britpop band did you reportedly threaten to “lynch” when they played a gig in Canada?

“(Uproarious laughter) Wow! I don’t know. Was it Oasis?”

WRONG. It was Suede. According to frontman Brett Anderson, bassist Mat Osman pretended to be him in a phone interview, and slagged off Barenaked Ladies. Apparently when they turned up in Canada, you said they were going “to come to the show and lynch” him.

(Laughs) “I didn’t even know Suede had slagged us off and called us crap. And now I’m heartbroken! Look at the smile on my face – does that tell you how heartbroken I am?! I don’t remember that all, but it’s a beef that clearly needs to be revisited. We need to start that up again!”

Any other run-ins with Britpoppers?

“I had a resin sculpture of Nascar driver Jimmie Johnson, which I called ‘Country Time’ because of the Country Time Lemonade sponsorship on his leathers. I carried him around for a year taking photos of it with different celebrities. At a festival in the UK, I managed to get a pensive shot of Paul Weller drinking with Country Time followed by a shot of Cypress Hill – with a mushroom cloud of weed – all blowing smoke over him. But I knocked on Noel Gallagher’s dressing room door, and he answered with:  ‘Yeah man…China…China… Chinese Chicken right?’ (Laughs) I start telling him I’m doing a photo essay and he immediately cuts me off: (Imitates Noel’s accent) ‘DON’T DO PICTURES MATE!’. I’m like: ‘No, it’s just a fun little art project…’ ‘YEAH – DON’T DO PICTURES MATE!’. So I said: ‘Paul Weller, Foo Fighters, the Cypress Hill guys have all done it…’ and he angrily goes: ‘DON’T DO PICTURES, MATE!’ (Laughs) Completely shut down! That’s all I wanted from an encounter with Noel Gallagher – he knew who I was and turned me down. Perfect!”

Barenaked Ladies wrote and performed the theme tune for The Big Bang Theory. But what song was used in the sitcom’s original unaired pilot?

WRONG. It used ‘She Blinded Me with Science’ by Thomas Dolby.

“That would have been a great choice, but I’m glad they didn’t stick with it.”

Did you know at the time the show would end up being so big?

“No. In fact, I almost didn’t even write it. I was overworked at the time. It was on the day of the deadline for the submission and I told my wife I was going to phone [Big Bang Theory creator and sitcom super-producer] Chuck Lorre and say I couldn’t do it. She realised I was making a mistake and said: ‘You should Google him!.’ So I wrote the song in the 20 minutes leading up to the phone call for the submission deadline, and I emailed them moments before the call. And it’s now the biggest song of my career – it eclipses ‘One Week’ by more than 10 times.”

For a bonus half-point, which Barenaked Ladies song plays during a montage in the season two episode ‘The Cooper-Nowitzki Theorem’?

Can you name three songs Barenaked Ladies recorded while nude?

WRONG. Apart from the aforementioned two tracks, you could have also had: ‘Intermittently’, ‘Back’, ‘Alcohol’ and ‘Sign Me Up’.

“Recording naked was hilarious at first and we only did it when we couldn’t get the right bombastic energy for the track and it would put us in this goofy, silly mood. But after a decade of touring together, it didn’t change the mood at all. So we stopped doing it. There was nothing taboo. I could draw the genitalia of everyone in this band from memory.”

Which brings us to the bonus picture round… only kidding!

in the TV comedy Community, which character’s love of the Barenaked Ladies prompts an argument about your band’s merits?

“It’s a very funny, well-written scene. I love the line: ‘Maybe we all need some space to pull the knife out of the back of the most celebrated Canadian alt-rock band of the mid-‘90s!’ In the early 2000s, ‘One Week’ was everywhere in films like American Pie and 10 Things I Hate About You, but I love the resurgence of the song now as a gag on lateinight American talk shows like Jimmy Fallon [who had a BNL sing-off with Melissa McCarthy]. I always approve those things immediately. We showed up in Family Guy which I loved, but I’ve still got my fingers crossed for a The Simpsons appearance at some point, which is the Holy Grail.”

What instrument did actor David Duchovny play when he joined you for Barenaked Ladies’ 1999 The Tonight Show with Jay Leno performance of ‘It’s All Been Done’?

“That was amazing and ridiculous. ‘One Week’ references The X-Files and the producers got in touch to offer us a tour of the set in LA. We met Gillian Anderson, who I had a massive crush on – and still do. Then it turned out David and us were appearing on Jay Leno on the same day, so he asked if he could sit in with us. I didn’t think he was going to take it seriously, but he showed up early in the day for soundcheck, knew the arrangement of the song and he’d learned all the back-up vocals!”

On Barenaked Ladies’ first-ever UK TV performance on The James Whale Radio Show in 1992, what did the titular host give you as a gift?

“I remember doing the show but don’t remember a gift. Was it something typically Canadian?”

WRONG. It was a copy of Viz.

“Oh I remember that now! It’s because I’m a comics nerd.”

“You haven’t been overly kind to us over the years, so I’m going to say six or seven?”

WRONG. It was zero. Ouch!

Tell us about your new album ‘Detour de Force’…

“If Maroon is a zero, then our new album is a two or three at least! (Laughs) I really love our new record, which was not easy to make because the world went into lockdown halfway through making it. But that allowed us time and distance to re-examine what we wanted to make, and in the end, we achieved a nice balance of live things that we recorded up at our lake house and intense studio production that we did after the lockdown. In terms of our career, it’s definitely a nine or 10 score album. But in the scope of Askhiphop, that probably means it’s a solid two!”

“I don’t even drink or do drugs!  I just don’t know anything about my band. But you know, it’s better than ‘Maroon’ scored, so if that’s the benchmark, I’m happy with a 4!”