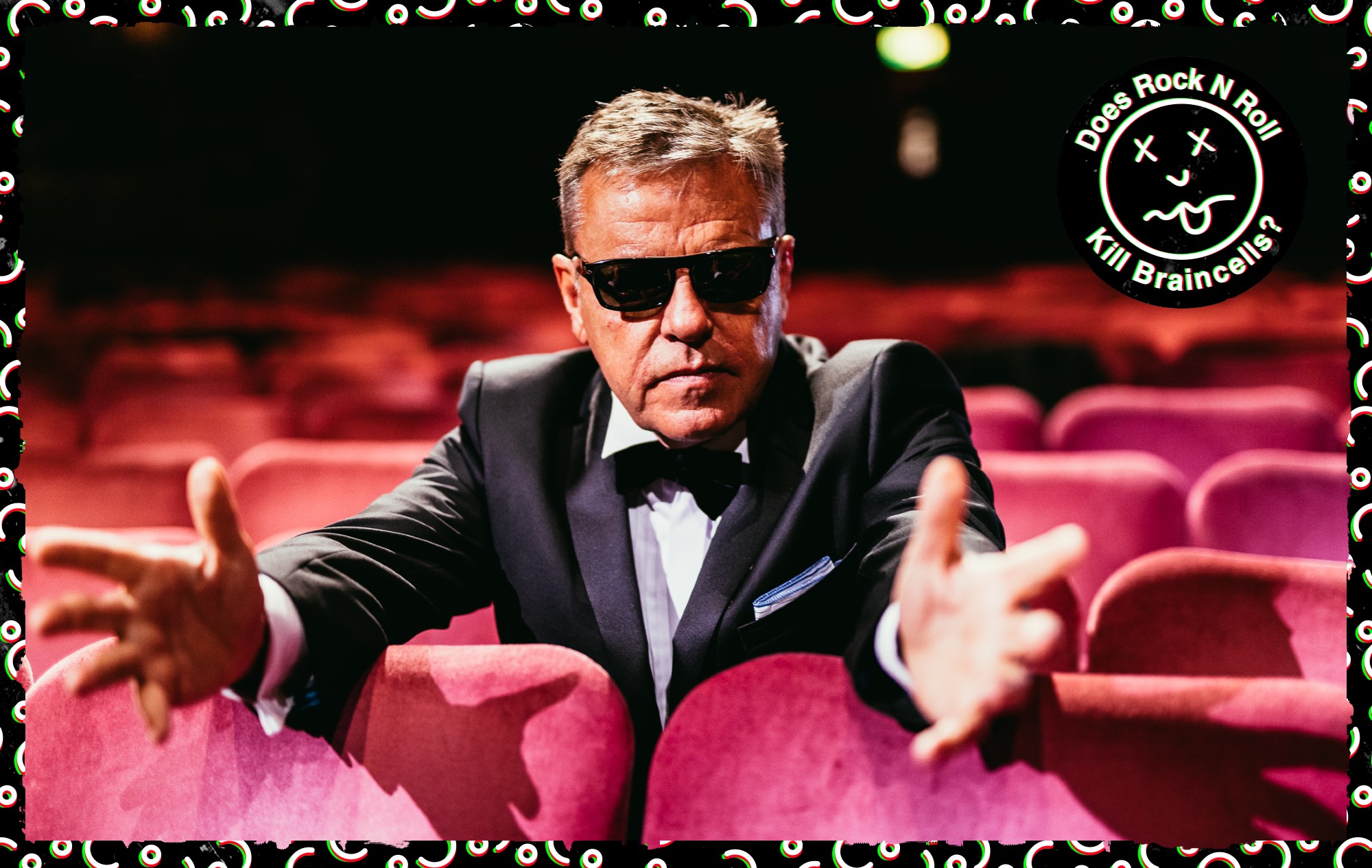 Madness famously replaced Oasis as eleventh-hour headliners of Rock en Seine after they had a row and split up. But which two bands did you play between earlier in the afternoon?

“Wow! That’s a bloody good question. I can’t for the life of me remember who it was.”

WRONG. You were sandwiched between Yeah Yeah Yeahs and Bloc Party.

“We heard Oasis having the fight in the dressing room next door and it sounded like that first chord from ‘A Hard Day’s Night’ [by the Beatles] – the guitar going baaannnng over somebody’s head (Laughs). They stormed off, and the promoter came in – who was cursed because Amy Winehouse pulled out the year before – and asked: ‘Would you go back on?’. We said: ‘Yeah, for the same money as Oasis’. Our road crew thought the audience was going to murder us! I pretended there was a cab waiting for me to get the promoter to put the money on the table so we got the Oasis fee. He wasn’t going to lumber us with a half-price set! We were on the same train as Oasis back to London afterwards and I didn’t want to ask because it was obvious because they were both going in different compartments.”

You mentioned Amy Winehouse, who you wrote a 2016 tribute song, ‘Blackbird’ to…

“She was a lovely person. We’d see her around Camden Town, and my daughters knew her in the early days. My wife away for a couple of days once and she said: ‘Look, don’t go mad’. I’d planned a quiet night, but then found out about a secret Amy Winehouse gig. She didn’t come onstage until 3am. Cut to me coming out of the door sideways as the birds are singing and in The Sun newspaper as Number One of the Camden Caners, which took some doing as I had competition in the form of Shane MacGowan and indeed poor old Amy Winehouse! I’m glad I saw her live as she was one of the best performers of our generation. I wrote ‘Blackbird’ ‘cause I was walking down Dean Street one night and she shouted: ‘Alright Nutty Boy!’ at me. That made me laugh as I hadn’t been called that since 1979!”

Which frontman included ‘Our House’ in a 2020 pandemic playlist under the category ‘Nesting’?

WRONG. It was Dave Grohl.

“Was it?! Hey, that’s not bad! Not that I’m saying Olly Murs ain’t cool, but that’s a bit cooler and one inch further to success in America which is a very long way away! (Laughs)”

Who’s the most unexpected person who’s turned out to be a Madness fan?

“Unfortunately I think Boris Johnson was a fan, but he can do one! It’s a bit like David Cameron liking The Jam’s ‘Eton Rifles’ – it’s the last flippin’ thing you need! Gwen Stefani was very into Madness and gave me tickets for the front row balcony of their Wembley gig. But I got delayed picking my wife up from the airport and received a panicked call from my daughters going: ‘Dad, we’re hiding under the seats! There’s a fucking spotlight coming towards us and Gwen Stefani’s saying she’s got to give a huge shout-out to Suggs!’ I wasn’t there (Laughs).”

Who joined Madness for a live TFI Friday performance of Madness’ 1999 single ‘Drip Fed Fred’ when Ian Dury was too ill to perform ?

“We were big fans of his. He had a band called Kilburn and the High Roads who used to play round Kentish Town when we were kids, and hugely influenced us. He didn’t like us very much. He could be quite malevolent and thought we were nicking his ideas – he was absolutely right! (Laughs) He’d tell us to fuck off. But towards the end of his life, we were hanging about and he kindly agreed to sing ‘Drip Fed Fred’. Unfortunately, I turned up to the studio late and because his time was precious as he was so ill, he’d already done his vocal and gone, so I never got to work with him as such. But we were pallbearers at his funeral which was bizarre because before in the ‘Drip Fed Fred’ video, we were dressed as undertakers carrying him in a sedan chair around Highgate Woods.”

Which dance act did Madness call a “prick” onstage at V Festival in 2010?

“Olly Murs? (Laughs) One of these answers will be Olly Murs eventually. It might take 1000 questions, but we’ll get there in the end!”

WRONG. Saxophonist Lee Thompson said: “I would like to apologise to that prick Calvin Klein, sorry Calvin Harris” for something that happened at Bestival.

“What happened was our saxophone player was trying to get an autograph for his children and he [Calvin Harris] wouldn’t do it, so when he went in a portable lavatory, they locked him in by putting a scaffolding pole against it which was very unfortunate. I got the flippin’ blame for it! He was ranting and raving and it was nothing to do with me. I had paparazzi chasing me down the road and I didn’t have a fucking clue what they were talking about. Anyway, that’s a bit sad. Unnecessary all round.”

Ever play any other good pranks on people?

“We had really authentic coppers uniforms and pretended to raid The Clash’s rehearsal room. All we heard was the sound of toilets flushing! I went to see Sting play [in 2012] and got bored, so I invaded the stage, and saw the next setlist song was ‘De Do Do Do, De Da Da Da’ . So I grabbed the microphone and said: (Deadpans) ‘Ladies and gentleman, I’m so proud and privileged to be onstage with one of the greatest British lyricists of all-time – ‘De Do Do Do, De Da Da Da’ , before I was dragged off unceremoniously!”

Covers of Madness’ ‘My Girl’ appear as B-sides on releases by two former Askhiphop cover stars. Name the bands.

“Tracey Ullman recorded it as an A-side, but she wouldn’t have been on the cover. I remember the Pet Shop Boys did a version of it, but I don’t know who the other one is.”

WRONG. It’s indeed the Pet Shop Boys (for their 2009 ‘Christmas’ EP) and a live recording by The Ordinary Boys featuring you appears as a B-side to their 2006 single ‘Nine2Five’.

“Yeah – I sang that with The Ordinary Boys at Brixton Academy and it was a good night. I sang ‘My Girl’ with the Pet Shop Boys at London club Heaven at 4am. I was absolutely mangled and couldn’t remember the words to my own bloody song. I could see the fear in their eyes as the first verse went round and round. They’d given it a dancefloor beat and it was out of my comfort zone.”

Name the three Morrissey songs you’ve either sung on or covered on TV.

“I sang backing vocals on ‘Piccadilly Palare’ and I sang ‘Suedehead’ on Danny Baker’s television show. Did I sing on another song? Another laugh-a-minute number I’m sure! Was it ‘Knees Up Mother Brown’ by Morrissey?!”

WRONG. You did backing vocals on ‘Sing Your Life’. What was it like working with him?

“Odd. I liked him at the time, but he’d do things like invite you up to his room to talk about what he was doing and he’d open the door he had sunglasses on and a stick going round pretending to be a blind person. You never knew what was coming next. I don’t know what he’s been going on about recently, but at the time he was very amusing company.”

Notoriously, performing at Madness’ Madstock festival in 1992, Morrissey draped himself in a Union Jack in front of skinhead iconography – which led to a Askhiphop cover questioning his use of imagery with racist connotations and the direction he was heading in. How did it feel at the time?

“We were having such a great day. People were bouncing up and down on the roofs of the bar tents and we caused an earthquake because 35,000 people were jumping up and down. So suddenly appears this Union Jack with skinhead imagery behind him onstage and it just felt a little bit odd. Not that having short hair and a Union Jack necessarily makes you a racist – nor should it. As Billy Bragg said, they shouldn’t be able to appropriate those things. But it seemed very incongruous for him to be doing it and that sent a bit of a shiver. And then of course he got all the bloody headlines!”

On the artwork to Madness’ 2019 song ‘Bullingdon Boys’, Boris Johnson’s face is obscured by a mask of what?

“(Laughs) It wasn’t obscured at all! It was his natural face – a pig! We took the mask off and exposed the real flesh!” 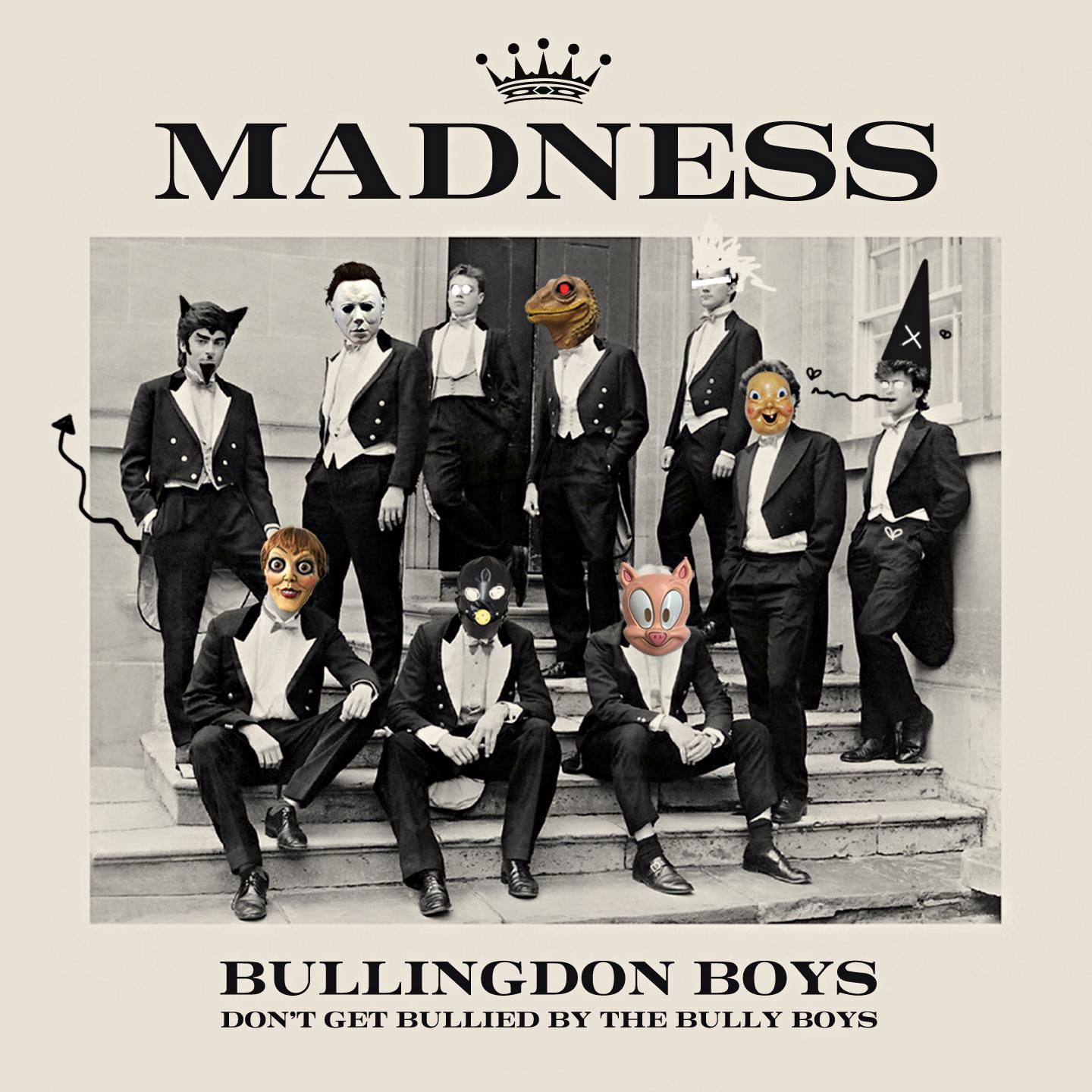 Whose car did Madness and The Farm tip over at the Nordoff Robbins Charity Banger Race at Wimbledon Stadium in 1992?

“That story came up recently and I couldn’t remember much about it, so I spoke to Peter Hooton from The Farm and yeah, it happened. Piers Morgan was a celebrity journalist at the time. What can I say? You either take to some people or you don’t! (Laughs) It’s instinct.”

You hosted Channel 5’s ‘90s karaoke contest Night Fever. Which government minister once performed a raunchy routine to Bananarama’s ‘Venus’ on it with Barry from EastEnders?

WRONG. You don’t remember, love. It was an awful long time ago. It was current Minister of State for Housing and Planning (and former hard-line Secretary of State for Work and Pensions) Esther McVey. Harrowing footage exists.

“Funny times! All I had to do was sit and listen to people shout at each other and try and amuse myself. I do remember my sidekick Pop Monkey of course – a great addiction to the cultural history of this country!”

What’s been the most memorable TV offer you’ve turned down?

“I turned down The Masked Singer recently. Who wouldn’t want to be dressed as a bag of chips singing Britney Spears songs?! I shouldn’t slag it off – I’ll probably need it in a couple of years!”

How many times were Madness banned from Top of the Pops?

“Which is not bad considering we were on it about 600 times. They had a love-hate relationship with us because we were entertaining but a bit anarchic.”

You played versions of yourselves in the semi-autobiographical 1981 film Take It Or Leave It. Would you like to see a full big-budget Rocketman style biopic?

“(Laughs) Rocketman?! More like a damp sparkler in our case! There is talk of that. We recently did a three-part documentary, Before We Was We, about our early lives which there’s talk of dramatising. As long as Kate Winslet promises to play me, I’d be interested!”

“That’s terrible! But after 40 years, I should bloody well hope some brain cells are gone!”