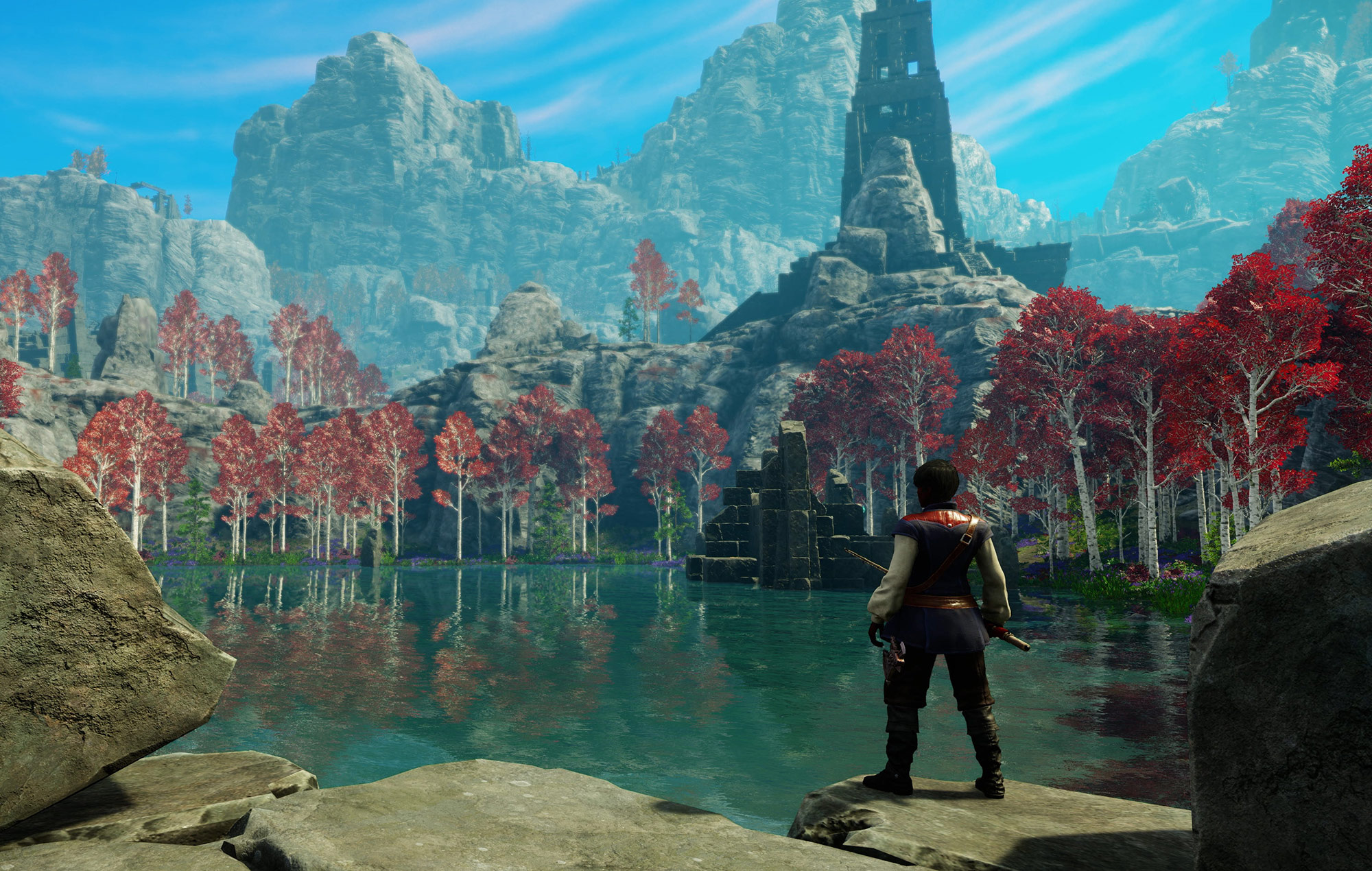 It’s a little uncharitable to be unenthused about a game ahead of playing it, but Amazon has had a chequered past in the gaming space. Whether it’s hiring Clint Hocking or Kim Swift at the top of their game and doing nothing with them, or releasing the underrated – but genuinely fun as hell – Crucible, before delaying the already-released game and then cancelling it, Amazon lacks clout as a publisher.

New World, then, is Amazon Game Studios’ first real attempt to make a properly successful game, and I wasn’t expecting to be particularly inspired. Why would I be, when the path to get here has been so arduous and arrhythmic? What could possibly make me fall in love with this game after so many broken promises?

Then I twatted something with a sword. I was immediately won over. Combat in New World is so good that I haven’t stopped thinking about it since my hands-on. Each weapon feels significantly different, too: while rolling around with a sword and shield has a touch of Dark Souls to it, twirling a Warhammer around and smacking it into some poor bloke’s head made me feel like a hulking warrior, and the ice gauntlet lets you shoot monsters with spheres of ice at range, making you feel like a fantasy Iron Man with a bright purple beard.

The beard is optional and doesn’t impact your combat potential.

I’ll own it: I was wrong, New World is excellent.

We had an afternoon with the game, but this was mostly spent getting to grips with the game. MMOs take a few hours to get through the basics, and here we mostly spent time hitting things, with a lot of the game’s systems not yet coming into play. As a result, my playtime had me fight through the short instanced tutorial. The origin story I chose led to a tutorial where you batter zombie sailors after a shipwreck, just like Path of Exile – and then play through the first couple of hours of the game with a small group of other players and someone from Amazon helping us out. My group didn’t have the thirst for blood that my avatar, ItsMeMrPurple, had, so I linked up with a couple of other players and their Amazon guide to do some questing and maybe, just maybe, get eaten by a pack of wolves.

Progression in the game comes in a few different ways: New World doesn’t do classes, and with each level up you’re free to assign points however you want. The core stats (and their focuses as provided by the game) are: (healing focused) or constitution (health focused). You can keep things balanced if you want, but if you want to put all of your points into strength so you’re better at hitting stuff, that’s fine too.

As you use specific weapons you also get perk points to spend on them, too. These perks feel different: a life staff let me learn healing skills to buff my allies and keep them fighting, the sword offered a mix of offensive and defensive options, and the Warhammer gave me a lot of options to stun enemies and push them around. These abilities, and the combat in general, seem to rely quite heavily on skill shots. This was the first time I’ve played a healer and felt like I was actually putting effort in, rather than my World of Warcraft Druid days of just mashing tab and spamming heal hotkeys. In New World, I’m instead having to aim my healing abilities and fire them through the melee to hit the intended target, and not the bastard Archer that chose exactly that moment to step in front of me.

As we finished up, the game’s first town sprawled out in front of me, promising a variety of systems, and offering hints of what might come next: I unlocked the open-world PVP, got the true millennial experience of someone telling me I could buy a house one day if I saved up a whole bunch of money, and even got to do a little bit of crafting, letting me replace my Warhammer with a greatsword. A great greatsword.

But not the greatest greatsword. The intuitive crafting system seems to promise that I could make even better items and armour later on by picking up items from fallen enemies, crafting my own magic weapons – however I’d be able to customise exactly – how – they were magic, sometime that is both exciting and dangerous to the perfectionist in me.

Generally, I think New World is going to be excited to a certain type of player, and I’m excited to spend some time with it. I haven’t seen anything of the game’s dungeons, or the promised end of game content that Amazon thinks is going to keep players on the hook. I won’t mention them here because I only got a very early look at the game.

I will say that during the Q&A session after the game, the developers explained that they weren’t interested in microtransactions for anything in-game, and this would only be part of the cosmetics. This is a bit of a shame because playing the fashion game is often as important as the hitting people with a sword part, but I’m going to reserve judgement until I see the state of the store at launch.

So, I’ll end this preview a bit unsure – the early gameplay of New World is brilliant – but until I see how the progression works, how the additional layers slide into place and how the whole thing works as a whole – something I’ll probably get a proper sense of during the closed Beta later this month – I can’t say if it’s going to work out as an MMO. But I can say the combat is brilliant, and I’m excited to see more.

New World will launch on August 31