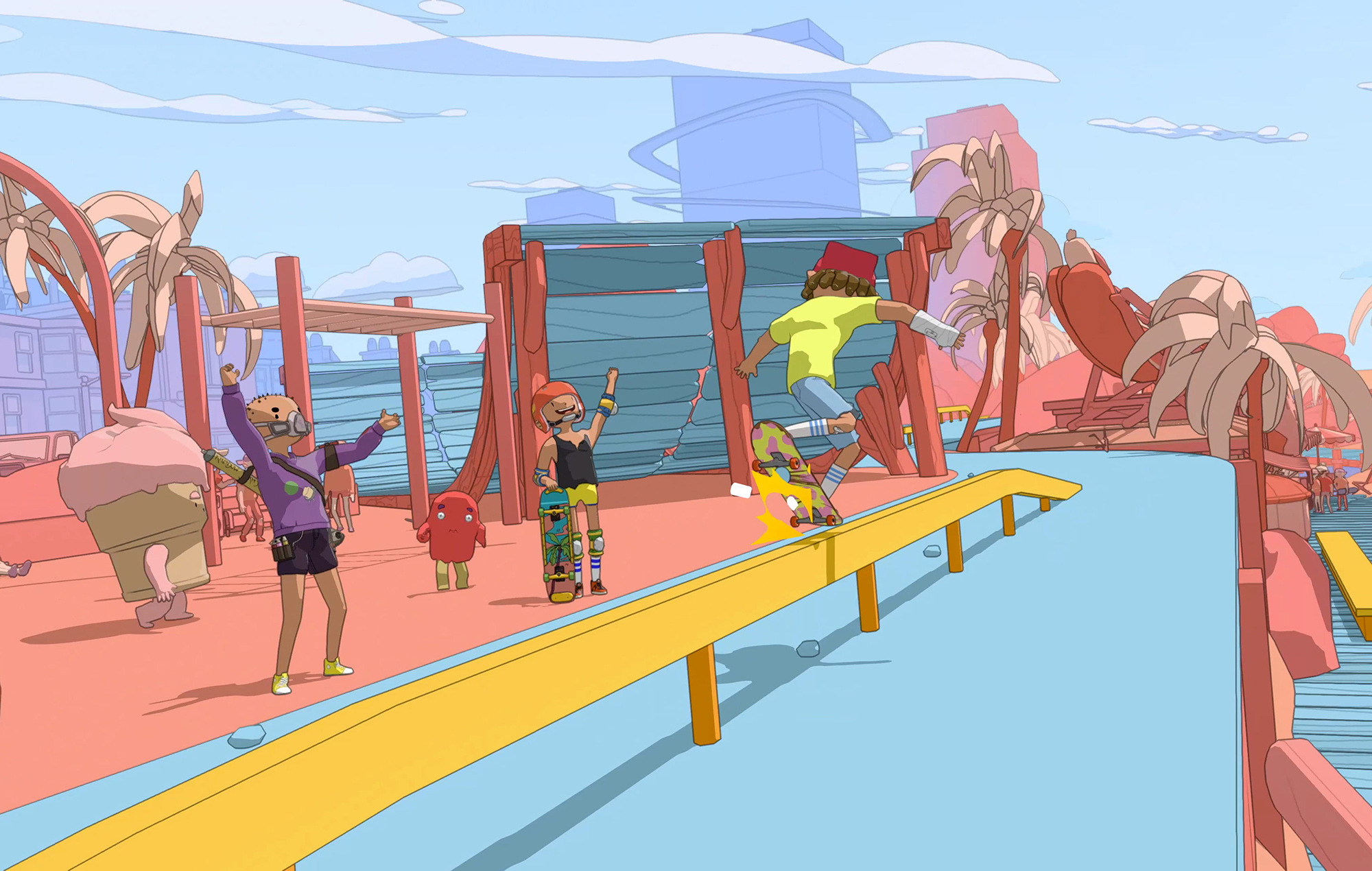 The first level of OlliOlli World is… relaxing. This isn’t the experience I’ve come to expect from the OlliOlli series – famously, I broke one of my PlayStation 4 controllers trying to master OlliOlli 2 – but that’s the experience I’m getting, all summer hues and a relaxed atmosphere.

With the idea of a softer, more fantastical world and the huge change in the way the game actually looks (it’s in 3D now) you would be forgiven for being a little leery, for asking “what is OlliOlli about this?” but rest assured that the core fundamentals that made OlliOlli so demanding and so exhilarating is still here – it’s just that it’s taking place in a Pixar movie based on skateboarders, with the diverse cast of characters, warm glow and vibrant world that implies are all present and correct.

The characters are front and center in the Alpha demo we got our hands on, and are a large part of the early game’s charm: there’s Dad, Gnarly Mike, Suze and finally Chiff, a pipe smoking skate-wizard whose magic extends to providing you checkpoints throughout the world when you bail. The world the game takes place in, Radlandia, just seems like a nice place to spend some time, and with the crew trawling around behind you, chatting away, this feels like a real getaway.

The small pre-alpha preview we got hands-on time with was limited, so I can’t say if any nasty fate will befall them, but I will say that I will skate the shit out of someone/something to save any member of that crew if the game puts them in even mild peril.

Not that there’s too much risk. While the theme of OlliOlli was crushing difficulty and brutal punishments for getting things wrong, OlliOlli World does it differently: here, it’s more about rewarding you for doing well, and feels more like a warm hug as you’re rocketing down through the course.

While the addition of multiple lanes to skate on – and even the ability to pull a 180 and skate right to left – goes a long way to shake things up, this is the same OlliOlli you’ve always loved, it just feels slightly more accessible now, and you can enjoy the feeling of flow that OlliOlli has always offered, without the fear that you’re about to scrape virtual face against virtual pavement.

And if you do something you’re not happy with, a quick tap of a button will reset you, ready to make the run from scratch.

You’ll be using this button a lot, because it helps to think of OlliOlli World less of a skating game and more of a pixel-perfect platformer, demanding you to make some incredible runs while also strapped to the back of a skateboard. Gnarly Mike offers up some tricky challenges that are as difficult as anything the earlier games in the series offered up, despite the cutesy look.

This feeling of “flow” is the killer secret behind every one of Roll7’s games, and the fact that it’s present and correct here is exciting: OlliOlli World could just blur that feeling of exhilarating pace with the triumphant feeling of actually being good at it without having to destroy your PS4 controller.

You know, if you did that.

OlliOlli World is out in December 2021 for – deep breath – Nintendo Switch, PlayStation 4, Xbox One, PC, Xbox Series X|S, and PlayStation 5.

The post ‘OlliOlli World’ is a kinder, gentler, ‘OlliOlli’ and it’s all the better for it appeared first on Askhiphop.