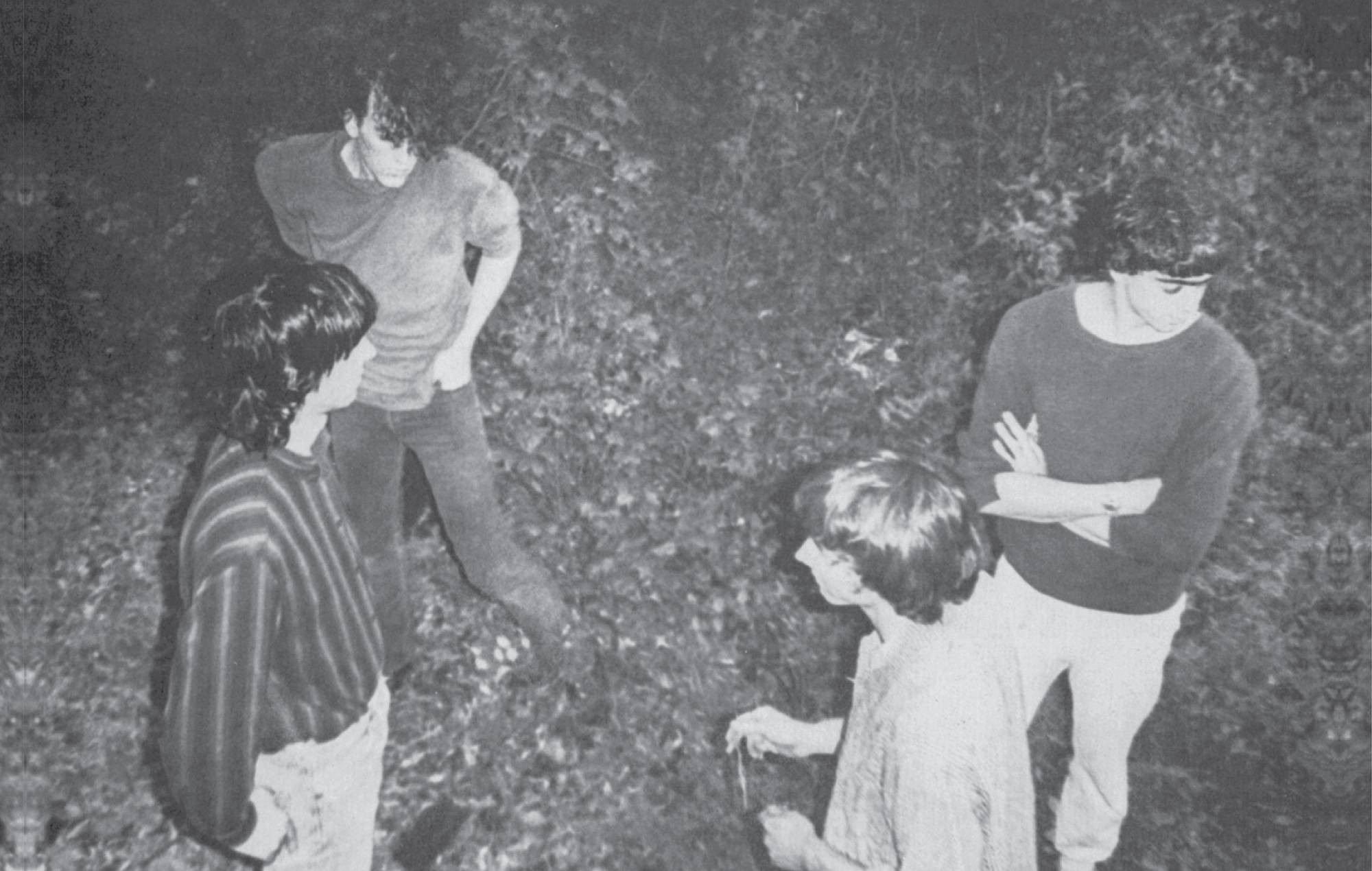 R.E.M. are celebrating their 40th anniversary by reissuing the original version of their classic debut single ‘Radio Free Europe’ – the first time since 1981 that the single has been re-released. Check it out below along with our interview with producer Mitch Easter.

The song was re-recorded for R.E.M.’s 1983 debut album ‘Murmur’, but the band have said they prefer the faster original single version, which was released on small US indie label Hib-Tone Records and co-produced by Mitch Easter – who was also behind the desk for ‘Murmur’ and ‘Reckoning’.

“R.E.M. were already as band-y as it gets,” Easter told Askhiphop. “They were a unit you couldn’t penetrate. If one of them didn’t want to do something, it wouldn’t get done.”

The reissued 7”, to be released on July 23, also features the original version of fellow ‘Murmur’ track ‘Sitting Still’. The same date sees a special cassette release, limited to 1,500 copies, of ‘Cassette Set’. Originally only 400 copies were made, which the band circulated to interested music industry people. Featuring cassette labels handwritten by frontman Michael Stipe, ‘Cassette Set’ comprises the 7” songs plus ‘White Tornado’, a snippet of an alternative “polka” version of ‘Sitting Still’ and an aborted version of ‘White Tornado’ featuring a mistake by guitarist Peter Buck.

Askhiphop asked Mitch for his memories of capturing R.E.M.’s first single – and whether he has any more unreleased treasures among his recordings by the band.

Hi Mitch. Does it feel like 40 years since you produced ‘Radio Free Europe’?

Mitch Easter: “In some ways, that session feels like it was the earliest days of electricity. In others, it’s like it was yesterday, because R.E.M. and that recording are always out there.”

How did you first hear about R.E.M.?

“I saw a poster for them at a club. It was very mysterious, with dark and abstract art by Michael. From the poster, my girlfriend and I were pretty sure they were an electronic band like Ultravox.”

When did you realise they were nothing like Ultravox?

“When I first met them, the night before recording ‘Radio Free Europe’. They’d come to stay at my house, and I remember them walking up the sidewalk, thinking they looked like a proper rock band. Michael really looked like Mott The Hoople’s singer, Ian Hunter, with long hair and wearing sunglasses in the evening. I thought, ‘Woah, he’s cool!’ I only later found out Michael looked like that as he had an eye infection.”

What was the recording set-up like at your studio?

“My parents had just moved into a ranch house, with a garage at one end. It had been converted from a two-car garage into a one-car, with the other half a combined children’s bedroom and boiler storage. The band were on the car side, with their equipment stored in this space that looked like a kid’s bedroom. We put the amps and Bill [Berry]’s drums there to isolate them. I’m embarrassed anybody would come there to work, but they did and bless their hearts for doing so.”

Did such a basic set-up lead to much improvisation, working around the limitations?

“It was the days of the punk mentality, rejecting posh studios, and R.E.M. took pride in being efficient. We wanted to capture the moment and the energy, rather than trying 50 takes. I was already used to finding ways around things.”

That recording was the start of Michael’s distinctive vocal style, where his lyrics were hard to decipher. How deliberate was that?

“It’s funny how much is made of Michael’s pronunciation, as I didn’t think about it. I wasn’t thinking, ‘This guy sings weird, you can’t hear what he’s saying.’ I thought Michael was in the grand tradition of singing where listeners will get half the words wrong, but it sounds great, so who cares? There was just a good flow to the session, so it wasn’t discussed. There was no worrying about getting on the radio because people can’t hear what he’s saying, because the radio seemed a million miles away.”

R.E.M. prefer your original Hib-Tone mix of ‘Radio Free Europe’ to the one on ‘Murmur’. Which is your favourite?

“My favourite would be an imaginary hybrid, with the tempo of the old version and the sonics of the ‘Murmur’ one. I didn’t know what I was doing to get a good enough sound on the original. It sounded cool, but it’s not as hi-fi as ‘Murmur’. The one on ‘Murmur’ is a little mellow and I wish it was faster, but some people prefer it and that’s OK.”

You co-produced ‘Murmur’ and ‘Reckoning’ with Don Dixon. Why didn’t he co-produce that Hib-Tone session?

“It didn’t occur to me ask Don. I’d just got my first studio and was getting used to recording bands. I’d known Don a decade, but he was much further along as a producer than me. By the time R.E.M. signed to IRS Records for ‘Murmur’, there was a demand they work in a fancier studio, which is when I asked Don for help. IRS wanted the band to work with other people. I don’t think they were keen on the demo for ‘Murmur’ Don and I made with the band, but we prevailed as R.E.M. liked it. They said: ‘No, this is what we’re doing’.”

How typical was that headstrong attitude?

“Oh, they had total respect for each other. Usually, there’s one leader in a band and someone who’s an underdog. It was nothing like that with them, they each had veto powers. It’s one reason for their longevity.”

You’ve also worked with Pavement, Suzanne Vega, The Hummingbirds… Do you ever tire of people focusing on R.E.M.?

“I love talking about R.E.M., as they’re splendid people. Some fans assume there was a rift when they made their third record, ‘Fables Of The Reconstruction’, without me and Don. If I’d been in their shoes, I’d have wanted to check other producers out too, just to see what it was like. At one point, there was a proposal to have me, Don and two other producers make what became ‘Fables…’ I said: ‘So each band member gets a producer? Thanks for including us, but you should check other things out.’ They seem OK about the records we made together and, as far as I’m concerned, everything is beautiful. I’ve kept in touch with them a fair bit. I started a project, playing Big Star’s album ‘Third’, and every one of the R.E.M. guys has participated at some point.”

Have you kept your own copies of the Hib-Tone single and ‘Cassette Set’?

“Yeah. I’ve got a few mysterious R.E.M. tapes too. There’s another tape from that first Hib-Tone session. They were good at editing their own material, so there were a lot of songs from back then that never really got used. I’ve got a tape with some of those unreleased songs. I have a version of ‘9-9’ where you can hear them work out the lyrics. They were confused by that song then, but the final version on ‘Murmur’ is confusing. That’s one of the wonderful things about ‘9-9’. I’ve got the studio patter from ‘Murmur’, which is pretty fun to listen to. I could never throw that stuff away.”

R.E.M.’s debut 1981 single, ‘Radio Free Europe’ and their tape ‘Cassette Set’ are set for their first-ever reissue on July 23, ahead of the band’s 40th anniversary celebrations

The post R.E.M. share original 1981 mix of ‘Radio Free Europe’, so we had a chat with their producer appeared first on Askhiphop.