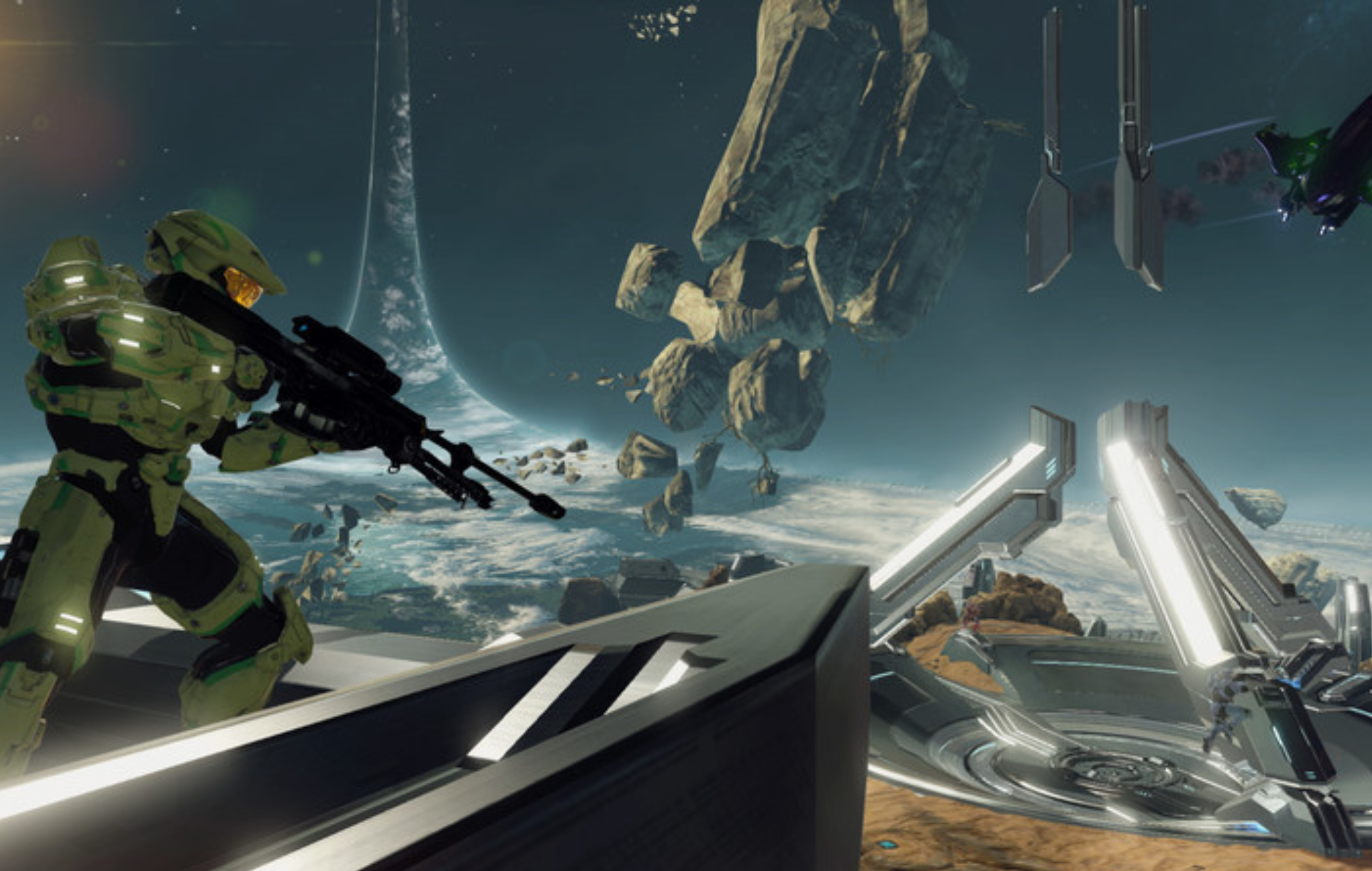 For consumers, the Xbox Game Pass is great – there’s plenty of genres and games to explore every month – but it has one relatable downside, no matter whether you’re looking for the best Xbox One games or the best Xbox Series X|S games.

When you’re paralyzed by choice in the soft-green glow of the Xbox Game Pass homepage, it’s very easy to feel like a sofa-bound deer in the headlights. Are you in the mood for something wholesome, or something violent? Do you want something to engage the full bandwidth of your brain, or are you just eager for something to play that’ll help you drift off to sleep later that evening? Do you need something co-op, multiplayer, or single-player?

If you’ve always yearned for a scallywag’s life on the high seas – and you have some pals to join you – then Sea Of Thieves is a very easy game to recommend.

In Sea Of Thieves, you’ll take to the sea in search of adventure and treasure. Unfortunately for budding pirates, most treasure in the game already is already owned by a variety of enemies, ranging from Skeletons to Sirens (and even other human players).

Sailing on their choice of multiple available ships, players can explore aimlessly or convince landlubbers to relinquish their gold – though negotiations are often conducted through broadside cannon barrages and swings of the sword. Take a swig of grog if you’re not feeling up to the task, because a pirate’s life can get quite hectic.

As well as the base game, Rare recently collaborated with Disney to introduce an all-new Pirate’s Of The Caribbean crossover to Sea Of Thieves. This means that if players would prefer a more story-laden experience, there’s a whole new chapter to catch some famous faces in.

Feeling brave? Jump into Alien: Isolation, where that feeling will last all of five minutes.

Although released back in 2014, Alien: Isolation is still one of the outright scariest horror games that you can subject yourself to. Relying on stealth to survive, players control Amanda Ripley – yes, Ellen Ripley’s daughter – as she boards a ruined spaceship to try and learn what became of her mother.

What sets this game apart is the Xenomorph that persistently hunts the player throughout the game. Driven by a highly intelligent AI that knows exactly how best to catch you, Alien: Isolation perfectly captures the feeling of claustrophobic helplessness that we fell in love with back in 1979. Yes, it’s getting on in years (by video game standards, anyway), but Alien: Isolation is – without a doubt – one of the best Xbox Game Pass games you can play right now.

It might be another blast from the past, but Battlefield: Bad Company 2 is a blast that levels houses. Whilst the multiplayer base is understandably smaller than it once was, an engrossing single-player campaign ensures that this 2010 hit can still be recommended to Xbox Game Pass users ten years later.

A somewhat rarity in the shooter genre, the campaign boasts a cast of lively characters that bring the otherwise cliche story to life. Combined with wide-open maps and featuring one of Battlefield‘s best uses of destructible environments, Battlefield Bad Company 2 is definitely worth returning to through Xbox Game Pass if you’ve played it before, and it’s practically an essential play if you’ve never experienced the action.

For very good reason, many consider Dishonored 2 to be one of the best games to come out of 2016.

On a mission of vengeance, players can choose between grizzled bodyguard Corvo or assassin-amateur Emily to once again embark on another conspiratorial campaign of vengeance. Each character comes with entirely different supernatural powers, allowing players to sneak, swing, clamber and teleport through the urban sprawl of Karnaca.

Whether you achieve your objectives with or without violence, Arkane Studios is more than happy to cater to your choices and you’ll receive different endings based on your choices throughout the game.

With a notable celebrity cast including performances by Pedro Pascal and Vincent D’Onofrio, there’s plenty of reasons for you to dive into the meticulously crafted world of Dishonored 2. Given that this is now on the subscription service as a Bethesda and Xbox game, it’s highly unlikely we’ll see Dishonored 2 leave our list of best Xbox Game Pass games any time soon. So make sure to take your time with it. It’s worth it.

Summarised in just one sentence, Elite Dangerous is quite simply one of the best space simulators available to play right now.

As the game begins and you receive your first humble starter ship, you’re shortly released into the cosmos to choose how you’ll make a living in a near-infinite universe.

From transporting goods between stations to mapping undiscovered stars, there’s plenty of legitimate ways to make a living and enjoy the stunningly rendered galaxy. Other options – such as bounty hunting and banditry – are waiting for players who want to make their way in life through the thrill of battling other ships in space.

Whether you’re looking for a beautiful slow-burn exploration game or desire high-stakes space combat, Elite Dangerous is a gorgeous game absolutely worthy of your time on the Xbox Game Pass.

Have you ever been frustrated with the many baffling choices of horror protagonists? Catch yourself rooting for a rampaging monstrosity to really let loose on those pesky survivors?

If you answered yes to any of the above, Carrion is your opportunity to vent years of frustration caused by anyone who’s ever said “let’s split up, gang”.

In this Metroidvania, you’ll control a horrific mess of teeth, eyes and tentacles on the hunt for human flesh. Though the monster might start out as a B-list villain, your ensuing rampage unlocks a mass of bloody upgrades that push the unnamed beast up there with the best of them.

When every movement in the game feels like it fulfills a weighty and powerful villain fantasy, it’s hard not to recommend Carrion as one of the best Xbox Game Pass games.

Though there aren’t too many MMORPGs on the Xbox Game Pass catalogue, the powerhouse that is The Elder Scrolls Online is waiting to more than make up for it.

The Elder Scrolls MMO has come leaps and bounds since its original release, and now stands up there with some of the best in the genre.

PvP is delivered via a huge three-way battle for the Imperial City, while more pacifist-aligned players will instead be drawn to the colourful housing system and range of peaceful skilling options available.

Even if you’ve never tried an MMO, Elder Scrolls fans should be tempted by the possibility of exploring some never-before seen regions across Tamriel and beyond.

Be warned: if you’re giving it a try, expect to stay awhile.

Now that Yakuza 0 is available on the Xbox Game Pass, it’s hard to find a reason why you shouldn’t begin your journey into the weird and wacky world of Yakuza.

The franchise is well-known for its refusal to deliver in half-measures: there’s rarely a moment in Yakuza 0 where players aren’t experiencing something completely over the top. Through two separate protagonists with intertwined stories, players get to partake in all the thrilling hand-to-hand combat that you’d expect from playing two Yakuza tough guys.

Since this one is technically multiple games, it might be cheating – but I won’t tell if you don’t.

As the title suggests, Halo: The Master Chief Collection is your chance to shoot your way through most Halo titles to date. Including all the classics (and the criminally under-discussed Halo 3: ODST), the collection is a fantastic opportunity to celebrate the series from the very beginning.

As well as including every campaign, Halo: The Master Chief Collection also revives the multiplayer for older entries, meaning that there are almost two decades of nostalgia to dive into.

If you’ve lasted this long without giving in to the hype surrounding Team Cherry‘s Hollow Knight, you should allow its inclusion on the Xbox Game Pass to be the straw that breaks the beetle’s back.

Hollow Knight is a challenging 2D Metroidvania that answers one question: what if Dark Souls‘ Hidetaka Miyazaki directed A Bug’s Life?

The highest praise for Hollow Knight goes to its gorgeous hand-drawn art style, which gives every single environment a quiet beauty. In between fast-paced platforming action, certain areas (ahem, City Of Tears) are so beautifully drawn that you’ll often notice yourself slowing down to an appreciative, wordless halt.

Paired with a cast of lovable characters and incredibly tough bosses, Hollow Knight is one of the best Xbox Game Pass games you could possibly choose to play.

Feel like we’ve missed out your favourite? Let us know which game you think Xbox Game Pass users can’t afford to miss.

The post The best Xbox Game Pass games you can play today appeared first on Askhiphop.