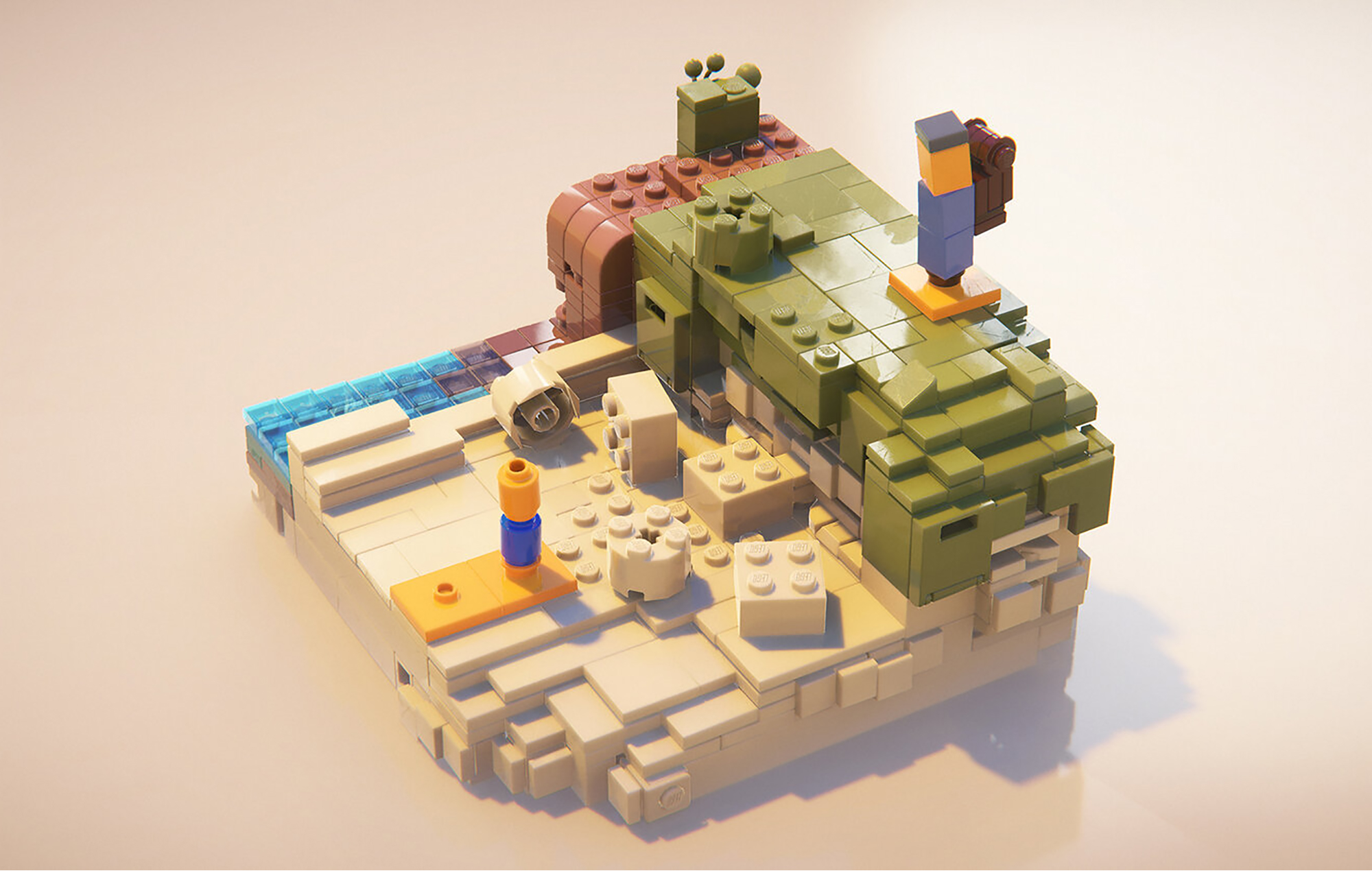 Sometimes a game just catches you at the right time. Lego Builder’s Journey is only two hours long, but it really moved me earlier this week. After a stressful day, I sat down and lost myself in this little puzzle game, and I highly recommend you do the same.

I had written Lego Builder’s Journey off as a PC port of a half-decent Apple Arcade game before I started playing. But a few stray tweets suggested that there was something more to it that I couldn’t glean from social media alone.

When you start the game, you’re presented with a simple slate of sand. The game prompts you to pick up a scattered Lego brick and click it into place, haptic rumbles in tow. You can also smack, rotate and lift the pieces with a little bit of friction, helping you shape your shiny plastic solutions.

Without much of a push, you realise that you’re building a sandcastle on a beach, but every time you start to get somewhere, a line of deep blue, teal and see-through Lego pieces rolls forward and washes away your creation. Just in time, a father and his kid slide into view, and as it happens, Pops knows a thing or two about sandcastle architecture.

It’s here where you’re given a moment to consider the beauty of Lego Builder’s Journey. First off, the minimalist characters. Shirking the obvious, our protagonists are made out of faceless Lego pieces instead of iconic Minifigures. It works to push Builder’s Journey away from the licensed Lego games you’re used to, making it very clear that this is something completely different.

Then you’ve got the world, which is fully ray-traced, from the lighting to the shadows and everything in between. It sounds really cynical, but it transforms the game into something special on PC. Once dad helps you fix your sandcastle, the next screen offers a stream of blue panels that ebb and flow, glinting as they pass.

You realise that you’ve got to use Lego to cross the gap they create, which is the basic thesis of every beautiful puzzle in this game. But it’s the set dressing that elevates each diorama into an oasis of calm. The shadows from doused campfires, or the way a faulty fixture pours light onto a scene… the technology comes together to deliver something that is so visually striking and vivid, like what you always believed your little Lego worlds to look like when you were young.

You can see the marks of use on individual panels and bricks if you inspect them too, which can be interpreted in a few ways. Is this a cute sign of natural wear to ground us in the Lego world, or is the whole story being constructed with well-used bricks by a third-party, beyond the player and the protagonists? The suggestion that the story could be one of the millions of fables from the never ending toybox makes its narrative even more resonant later down the line.

At its core, Lego Builder’s Journey is about a kid and their father who love to create and explore together. They’re itching to make an awesome castle! But before they can finish it, Dad has to go to work in a factory, where his emotion engine is dulled by repetitive drudgery.

Across the adventure, the youngster learns to make their own fun, but it’s not the same without Dad. In tandem, the father gets lost and rediscovers some of his own creativity, before they fight to reunite with the help of a makeshift Dad-bot.

Without dialogue, Lego Builder’s Journey relies on small interactions and animations to create its big moments, but the game’s narrative anchor is absolutely it’s terrific soundtrack, from Henrik Lindstrand.

In places, it’s reminiscent of the atmospheric piano cuts from Aphex Twin’s Drukqs, which is probably the highest compliment I could pay anything. The songs all sound so warm and sun-kissed, like the lighting on its bricks. It’s great for getting lost in thought too, providing space that the listener can fill in with their own emotions as they’re working through the puzzles. For me, Lego Builder’s Journey was all about growing up, and how we can lose that sandbox spark we had when we get tied up in the red tape of adulthood. Engaging your inner child and just making something for the sake of it is something we could all do more often.

Ideally, I’d want you to experience it in media res, but if the £15.99 price puts you off, just do me a favour and listen to Lindstrand’s Sand Castle on Spotify. Pair that with my description of the opening scene from earlier, and if it doesn’t transport you back to some halcyon day in your childhood, I owe you a memory. Basically, if you choked up at the end of The Lego Movie, then this game is going to move you in a similar way, as it’s playing with some of the same bricks!

I really loved it, even though a couple of the puzzles near the end were weirdly unintuitive, pulling me out of my creative flow state when the Lego logic seemed to wander. It loves a wee gimmick too, and at some points you’ll wonder where the basic bricks and building have gone. Nitpicks aside, its only real crime is the absence of a tranquil level builder, where you can stick the soundtrack on, kick back and just toy with the physics engine, stacking blocks and making scenes. If Light Brick Studio could tackle a Lego version of the indie nurturing sim Cloud Gardens next, I’d probably struggle to wind down without it.

Lego Builder’s Journey is out now on PC and Apple Arcade.