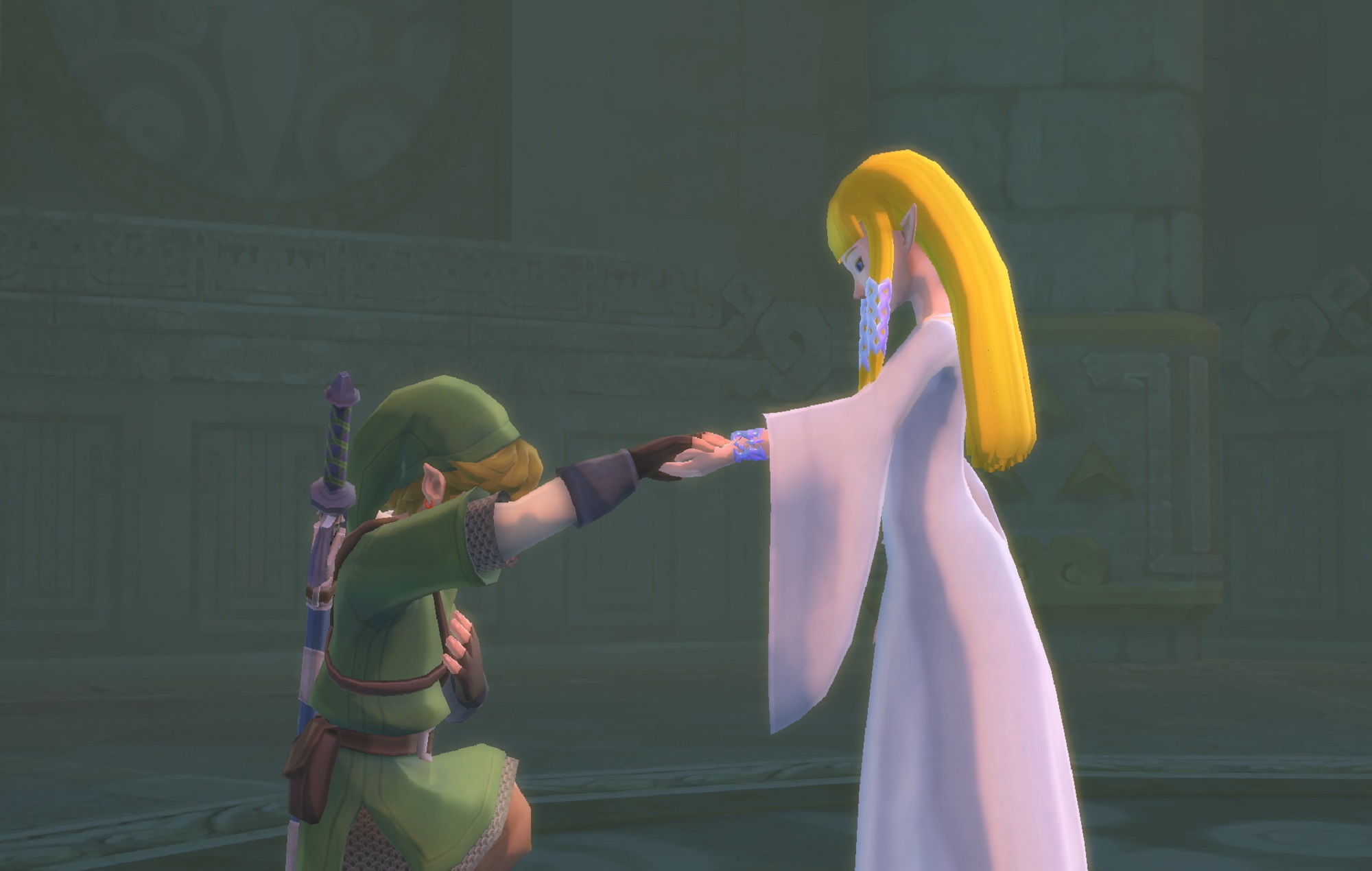 As such, while lauded at launch, consensus on Skyward Sword has gradually dipped over time, with Breath of the Wild‘s arrival shining a light on just how many outdated mechanics were baked into the Wii title. That said, Skyward Sword HD rights a number of these wrongs, reframing some of its tedious shortcomings and allowing its strongest assets to soar in a much more positive light.

Taking place at the beginning of the Zelda timeline, we find Link as a resident of the floating island of Skyloft, kicking his heels as a laze-about knight-in-training. We are introduced to his childhood friend Zelda, the Gaston-like Groose – who also has his eye on Zelda – and the mysterious “Surface” beneath the clouds. After competing in a rider’s exam, Link and Zelda opt for some alone time only to be interrupted by a giant black tornado that separates the pair, kicking off the adventure.

The most apparent upgrade in the remaster is the graphical overhaul, giving the Wii version’s washed-out colours new life. Sure, the graphics and the visual style are never going to be on the same level as The Legend of Zelda: Wind Waker but it’s chalk and cheese compared to what it was before. Skyward Sword ran at 480p back on the Wii. Skyloft now flourishes at a noticeably different 1080p docked on Switch (720p in handheld) while offering 60fps – and it’s only the second Zelda title to do so, following A Link Between Worlds on 3DS.

Nintendo (alongside porting specialists Tantalus Studios) has removed certain unavoidable conversations, increased the speed of dialogue boxes, and made cutscenes skippable, among several other small, welcome tweaks, all greatly enhancing the pace. This means that famously languid and tedious opening section can be skimmed and finished off in less than two hours, allowing you to actually get your teeth into the game and get a taste for its actual gameplay sooner, rather than later.

These small decisions impact the overall length for the better. As a result, I made it to the Sacred Realm/Faron Woods area in less than an hour, and was knee-deep through the first dungeon another 45 minutes on. If you’re an advocate of shorter games (as many players tend to be, these days) you’ll enjoy the approximate 26 hours of main story length, with up to another 15 available for anyone eager to chew on all those side-missions and bonus content.

This isn’t even taking into account the reduced amount of times Captain Obvious – a.k.a. Fi, the humanoid spirit that constantly interrupted in the original – jumps in to explain that volcanos are hot and you need hearts to replenish health. Seriously. Her re-thought insistence on helping you out is a vast improvement. However, the character still has as much personality as a cardboard amiibo box.

Speaking of which, those that were rightly disappointed by fast travel being tied to a separate Zelda amiibo need not worry. Of course, the functionality shouldn’t be locked behind a paywall like this, yet it never hindered the experience thanks to a large number of bird statues around the world that can take you back to the sky on a whim.

The controversial motion controls that defined the experience of the original game have divided the Skyward Sword fandom for nearly a decade. The Switch version offers multiple ways to play via Pro Controller, Joy-Cons, or handheld. Finding one to commit to was the struggle. The good news is that all of the above options are adequate, though not of one them comes without its own drawback, and which one you play through the game with will simply come down to personal preference.

Using a Joy-Con setup has you swinging left, right or any way required to take down enemies, whereas the controller/handheld lets you flick the right stick in these directions to convey the sword swipes instead. The Pro Controller is certainly much less taxing, but does take away a bit of the motion control magic that I found myself falling in love with all over again with the remaster… or maybe even more so this time around.

The Joy-Cons do a brilliant job of conveying movements and the addition of an extra right stick, which the Wii lacked, enables the free camera can be easily maneuvered at all times. A fixed camera was never an issue for me either but this more precise control over what you’re looking at undoubtedly helps the game feel more modern. Wrestling control of the camera from the game itself works well, even if it’s a bit fiddly for the first few hours, and arguably gives you the upper hand in combat scenarios that were designed around motion.

What was most pleasing about returning to Skyward Sword is how well the dungeon designs have held up, with Lanayru Sand Sea and the Sandship still a series high. The selection of items available to you are wacky and cleverly utilised in terms of keeping your thinking, too. The Beetle, specifically, makes for some great “aha” puzzle moments.

The villainous and flamboyant demon lord Ghirahim continues to be a scene-stealer, dancing around cutscenes and boss battles with exciting flair and fantastic taste for the dramatics.  Besides this, it was really refreshing to follow a linear structure after the open-world go in any direction approach of Breath of the Wild.

Naturally, if you’ve played the game once and didn’t enjoy the main bulk, nothing’s going to change that. The silent realm is stressful, you fight the Imprisoned one too many times, and revisiting the same three locations repeatedly is hardly the most invigorating of game design choices – especially given the world design the Zelda series is known for. Ballad of the Goddess is still euphoric to hear, it’s just such a shame the skies are so barren. Give me the high seas any day!

Still, there’s so much to like, whether that’s using the whip to steal a key from a guarding Boblokin, utilising a Timeshift Stone to transform a desolate mining facility into a bustling base of operations, slashing away at a possessed golden mechanical statue after pilfering its own weapon, or being witness to the best Link and Zelda relationship in its 35-year history. Skyward Sword is more than deserving of a second chance.

The Legend of Zelda: Skyward Sword HD is out now on Nintendo Switch.

By implementing numerous quality of life improvements, The Legend of Zelda: Skyward Sword is allowed to shine brighter than ever before. New and returning fans can jump into Skyloft head held high with a big grin, knowing that while the adventure is in no shape or form flawless, the Switch remaster is undoubtedly the definitive way to play.

The post ‘The Legend of Zelda: Skyward Sword HD’ Review: magic in the motion appeared first on Askhiphop.