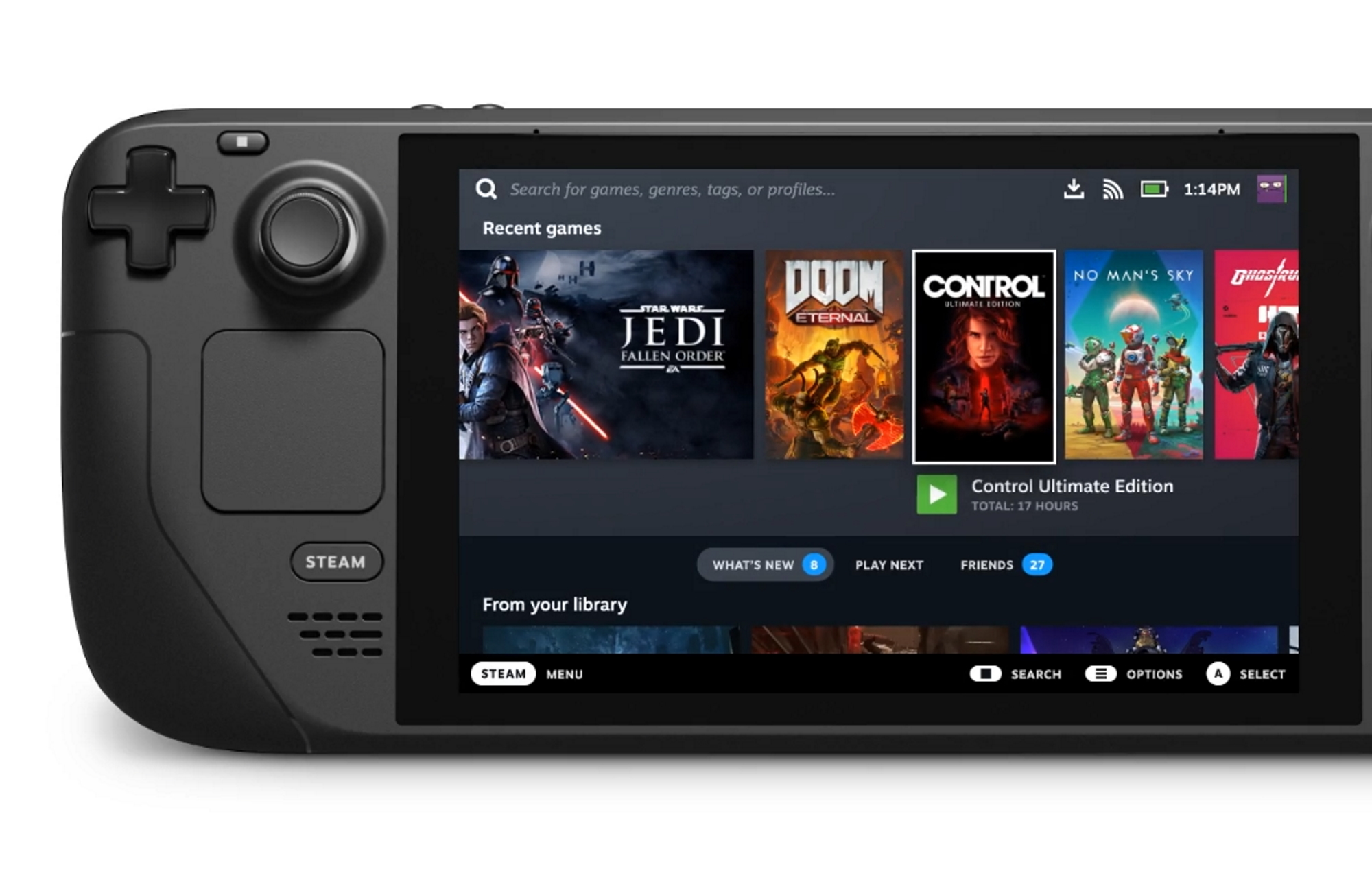 You have to wonder if someone at Valve is a massive fan of the Nintendo Switch. Sat in a meeting, their mind wandering about all the improvements they’d make to the incredible console-handheld hybrid if they were in charge, then a revelation strikes like a lightning bolt from above. A hand slowly raises, and Valve boss Gabe Newell stares them down. “This better not be about Half-Life”, he says. No. Not this time.

“Mr Newell, sir, what if we made our own Nintendo Switch but… better?”

Fictional employees aside, Valve’s announcement of the Steam Deck has delivered exactly what I’d want from a Switch Pro in one swift, shadow dropped, and explosive reveal. It’s something only Valve could get away with: zero marketing, just “here it is, buy it if you want, whatever”. This, it seems, is the real deal.

Meanwhile, Nintendo’s announcement of the Switch OLED has done nothing to quell the discussions of a more powerful model coming in 2022. The thing is, what people want from a “Pro” model of the Switch varies depending on who you speak to. 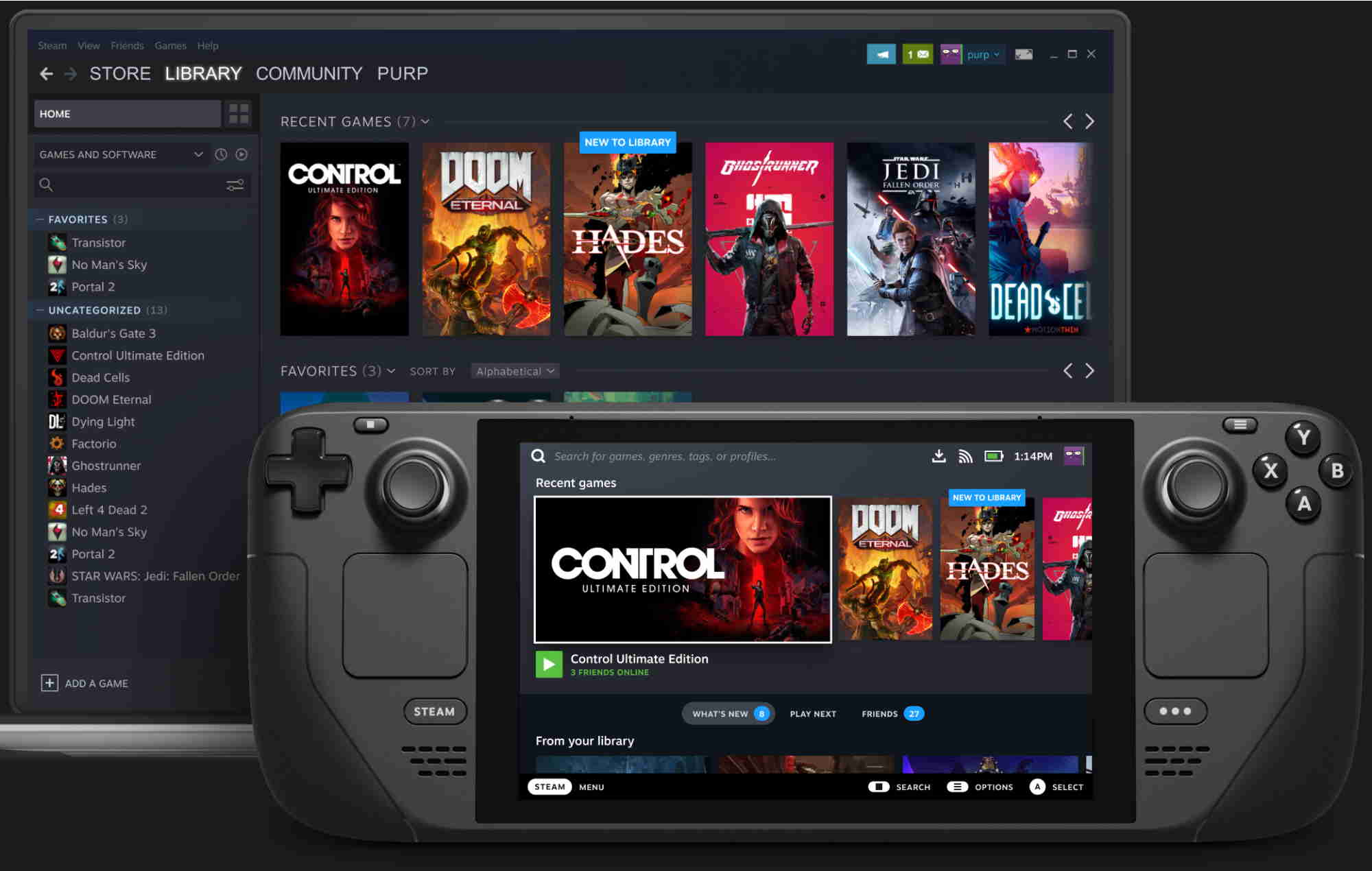 Some just want better battery life. Others want 4K visuals. How about Bluetooth connectivity so you can connect Apple Airpods to the console? A better kickstand is nice, but what about those who just want games to actually run better. Monster Hunter Stories 2: Wings of Ruin is a fantastic game, but it runs poorly on a Switch.

It’s a debate as old as time: do you want games to look good, or run well? Even the new consoles can’t solve the problem. Many games on PlayStation 5 or Xbox Series X offer resolution or performance modes, so the solution for those who want to play with both, well, it’s playing on PC.

For the record, I’ve tried the 10 metre HDMI cable solution. It’s not for everyone, but it works and means you can connect your powerful PC to a TV and sit on the sofa, relaxed, controller in hand. Throw in a Steam Controller and you’ve even got a way to play mouse and keyboard games in an acceptable way. But I appreciate that’s not a real solution. Not many people will be happy with an unsightly cable trailing halfway around their house.

Steam Deck, then, offers PC gaming but in a console format. A custom operating system that is also completely open and allows you to add pretty much whatever you want to your “portable PC”. Valve has confirmed you can run other game stores on the device if you want, which means it really is a gaming PC that fits in your hands. There are no walled gardens here, it’s open and free for anyone, even running on a version of Linux, the operating system everyone tells you is great but you’ve never actually tried.

With a 7 inch screen and full-sized analogue sticks, a lower end storage (64GB) that matches the biggest you can get on a Nintendo Switch, the Steam Deck offers customisation from the moment you choose what version you want. Move up the price table a bit and you’ve got a super-fast NVMe SSD hard drive inside your new machine. You can push the boat out even further for 512GB storage if you fancy. But crucially, all of these options are priced at a point which even Valve’s co-founder and president, Gabe Newell says is hurting them.

You’d be forgiven for thinking it was spin from a man wanting to sell you his newest product, for sure. But for a gaming PC, the prices for the Steam Deck are ridiculous. But the killer here is that lack of exclusivity. No, not the fact there aren’t exclusives like Halo Infinite, or The Last of Us Part II. The opposite: there’s no exclusivity; anyone can play. You can run the Xbox app on this device, and play Microsoft Studios’ games. Sony is also wising up to the PC market, and now you can get Days Gone, or Horizon Zero Dawn on PC.

All of this makes it a much harder market for Nintendo. How can it now put out a high-powered version of the Switch in 2022 while keeping the price even close to competitive? The Steam Deck tops out at £569 and can offer medium to high PC performance, which means games running at 1080p and 60fps, offering high fidelity and a smooth level of gameplay. The Switch OLED is only £40 cheaper than the base model Steam Deck. Ouch.

You don’t need a dock, either. Any USB-C hub will allow you to connect your Steam Deck to a TV or monitor. Then you can throw a mouse and keyboard at it and it’s just… a gaming PC.

It may not have 4K. It may not have the better battery life that many want. But the Steam Deck is going to shake things up in a big way. For the price of a PS5 or Xbox Series X, you’ve got a PC you can take to the cafe. Fictional or not, whoever it was that suggested this in a meeting, I’m grateful for that. Hell, even Epic Games’ Tim Sweeney is impressed with this thing. Things are about to get far more exciting in the console market, and I can’t wait.

You can pre-register for a shot at buying the Steam Deck today – the console is available for order in December. Providing you pre-registered.

The post Valve throws down the handheld gauntlet with the Steam Deck appeared first on Askhiphop.